Presentation film for iVocAudio (in English)

Here it is, just finished a few secs ago!
Presentation film (english)
Posted by Jean-Eudes Lepelletier at 5:19 PM No comments:

"First" is great, but also means:

At 22h45 Turkish time, I received Apple's e-mail indicating to me that the status of my App has changed to "Waiting For Review"!
Crossing my fingers...
Posted by Jean-Eudes Lepelletier at 2:51 PM No comments:

Here is basically what appears about iVocAudio on the AppStore

Thanks to iVocAudio, you will be able from now on:
- to memorize any word, sentence or notion,
- in a fun, ultra-quick and optimized way.
How does it work?
There are 2 steps:
1) Recording: you record Question/Answer couples with the iPhone's microphone,
2) Game: For each couple, iVocAudio will test you in an optimized way about the question (resp. answer) and you have to indicate whether you know the answer (resp. question) with a simple move on the screen.
Why is it so great?
√ You save a lot of time by recording directly from the mic,
√ You progress quicker, since the app tests you in priority about the question/answer you know the less,
√ You can play anywhere without having to look at your screen:
- in your car (you won't feel sick etc.),
- when watching television,
- in your bed, with the light off,
- while queueing up,
-  with bright sun (at the beach ;-))
The people with impaired vision can also take great advantage of iVocAudio for this same reason.
√ Everybody can play! This app can be used by young children or by older people indifferently thanks to the simple interface, and uses are infinite depending on what you really need.
√ The number of themes you can record is unlimited: the only limit is the storage capacity of your device.
√ iVocAudio will easily adapt to your everyday life. You can « study » several weeks or months later, since iVocAudio memorizes exactly what needs to be insisted on...
Typical use examples

√ 3 possible languages for the display of the menus: English, French and Turkish. More to come depending on requests.
√ Ranking of each couple with stars corresponding to levels (equivalent: from 0 to 10 points), regrouped according to 4 colours: red, orange, yellow and green.
√ Graphic Pie Chart describing for each project your general progress, by indicating the propositions of couples in red, orange, yellow or green.
√ Detailed info for each couple: number of fails, of successes, of successes in a row, and the two directions: Question=>answer or answer=>question.
√ Number of projects and couples unlimited in the normal version of iVocAudio, limited to 2 projects with 6 couples each in the Lite version.
√ Recording of the couples by pressing a unique button.
√ In the game mode, you can choose for each question 4 options: listen to the question again, listen to the answer, indicate that you know the answer, indicate that you don't know the answer.
√ Several sorting modes are available in order to optimize your learning, based on 2 main sorting keys: according to stars/according to fails and then according to successes, randomly, or according to recording order.
√ Possibility to name, rename or delete any project.
√ Possibility to delete any couple,
√ Possibility to reorganize and sort out the projects according to your needs,
√ Possibility to create a new project by using the data from another project (title of project, categories of the couples),
√ Possibility to use headphones or the iPhone's speaker,
√ Possibility to reset the scores for any project,
√ Possibility to restart any game by triple tapping anywhere on the Play Screen.
√ In Play mode, a bell sound goes off at the end of every game in order to warn you that you went through all the couples of the project. The game will then restart.
√ In Play mode, possibility to indicate that you know (or not) the answer before the end of the question. 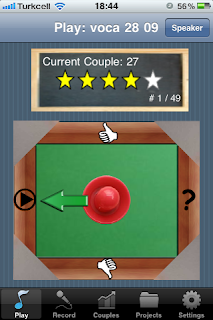 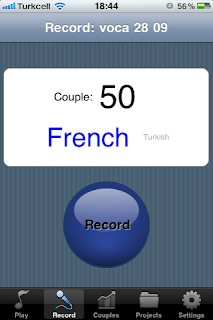 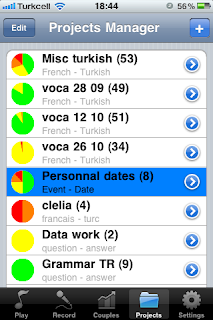 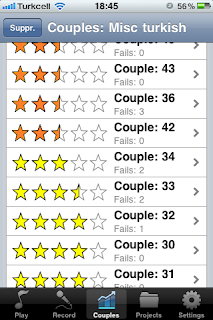 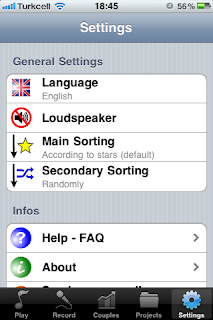 iVocAudio is an App for iPhone that dramatically improves your memorization speed of whatever you need to remember! (dates, events, formulas, vocabulary etc.)
The website for this app is: http://www.ivocaudio.com

Jean-Eudes Lepelletier
French, in my thirties, currently working in Automobile industry in Turkey representing there a French car manufacturer, married, with 2 young children. Developped iVocAudio and iPic2Voice for iPhone during free time.

If you want to send me your feedback, ask for more infos or just chat with me about iVocAudio, you can send me an e-mail : contact(at)ivocaudio.com